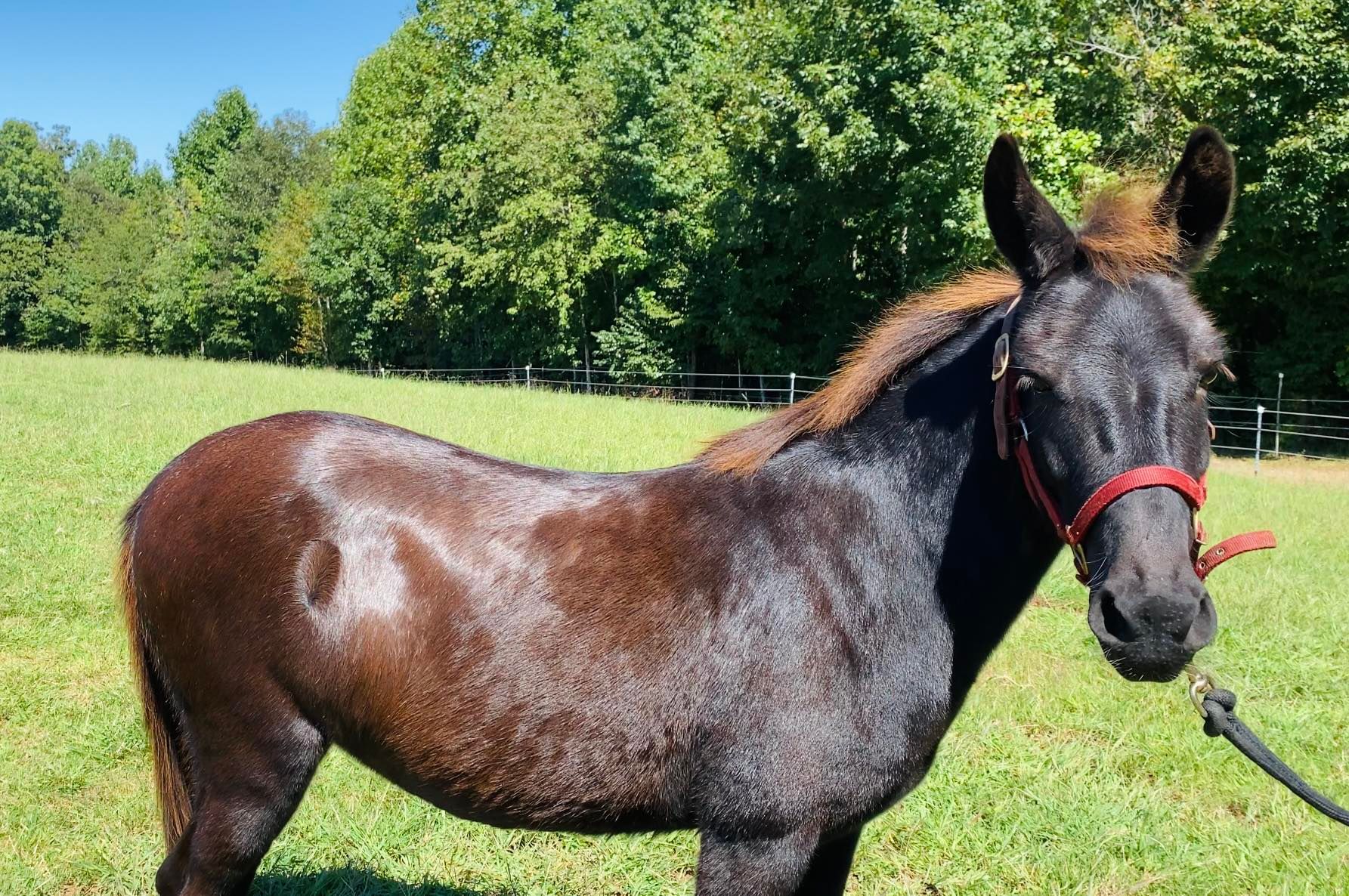 Our little hinny Isaac has quite a tale to tell. Abandoned at a Pennsylvania auction at three weeks old, mom nowhere to be found, he was sick and on his way to an early death. A rescue friend sent me the video – he was pitiful. Could she pick him up, we asked? Yes, she would – even though it was late in the day on the 3rd of July. She loaded little Isaac and called.

She was sure he was sick. Yes, we could tell from the flopping ears and sad demeanor. Was there a vet on the way home that would take him? No – no one was open. Everyone was closed in anticipation of the Fourth of July holiday. We called our vet in Texas, sent her the video. Do you have any Doxycycline she asked? Normally, she wouldn’t prescribe anything without seeing the patient, but we were up against a wall. Fortunately, our friend had been treating a dog with Doxycycline and had some at home. Our Texas vet gave us the amount and Isaac got a dose. It probably saved his life. Fortunately, our friend had worked at a vet’s office years ago. She and the vet were still in touch. She called. Dr. Brian Burks would take him if he could come in the next morning. Get him there, we said. Our sweet friend loaded Isaac back up and drove two hours on the Fourth of July to the vet clinic. Dr. Burks who would become Isaac’s hero was waiting.

That began the journey now know as “Saving Little Isaac”

Isaac was very sick. You name it, the poor little guy had it: pneumonia in both lungs, anemia, and the worst case of ulcers the vet had seen in 30 years of practice. There were antibiotics, sleepless nights, waiting for the phone to ring with bad news, and more antibiotics when the first ones didn’t clear up the abscesses in Isaac’s lungs. Finally, after two months of intensive care – improvement! We were so happy! Then – more ulcers (he needed a friend but was too sick to have one, so we got him a teddy bear), more treatments for his lungs, Gastroguard every day, and more antibiotics. At last – Isaac was better; the ulcers were improving and he was now a year old. We had another issue. Isaac needed to be gelded – and he needed a real friend. Step one: gelding. He was a cryptorchid. That meant surgery, so we held our breath and prayed his lungs would hold up to the anesthesia. Dr. Burks called. Success! Isaac was a gelding. A month later we saved Ellie, another hinny, and Isaac had a friend. After 14 months, it was time for Isaac and Ellie to come home. He will always need to be watched since his lungs are scarred, but his ulcers were gone and he had a friend too. It was a long journey – but worth every penny and sleepless night. Isaac’s friend Ellie has now sadly crossed the Rainbow Bridge, but Isaac has a new buddy in our Frodo and they live happily together at Critters Corner barn. 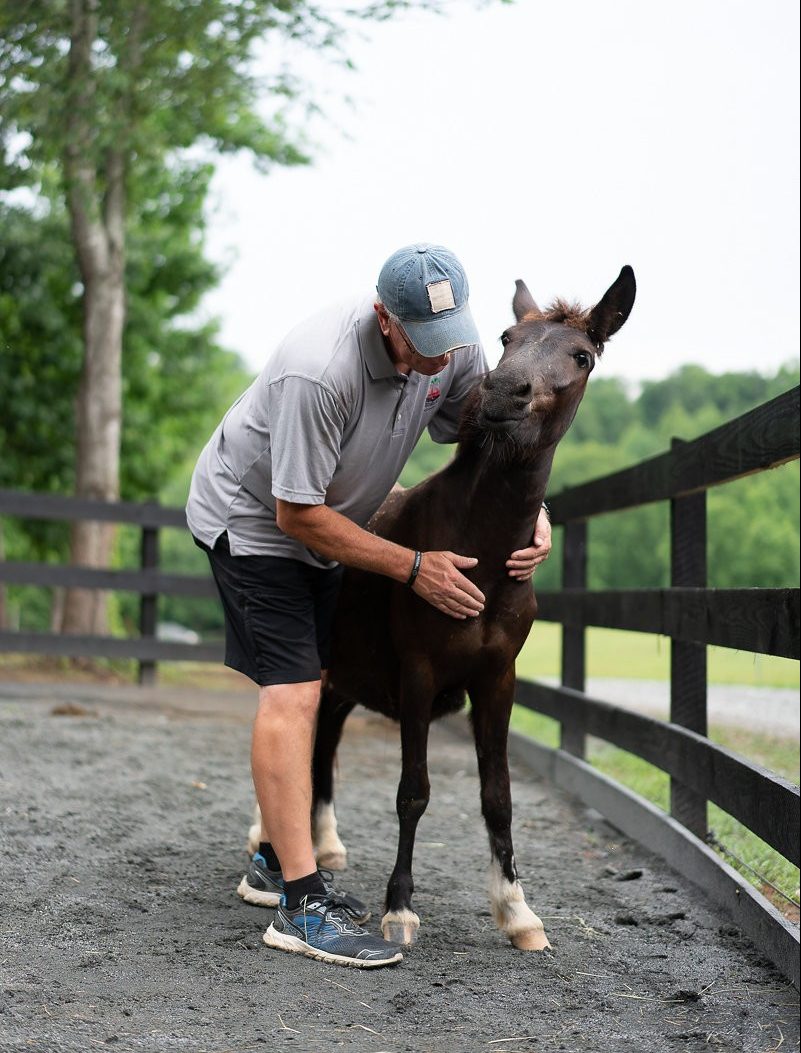 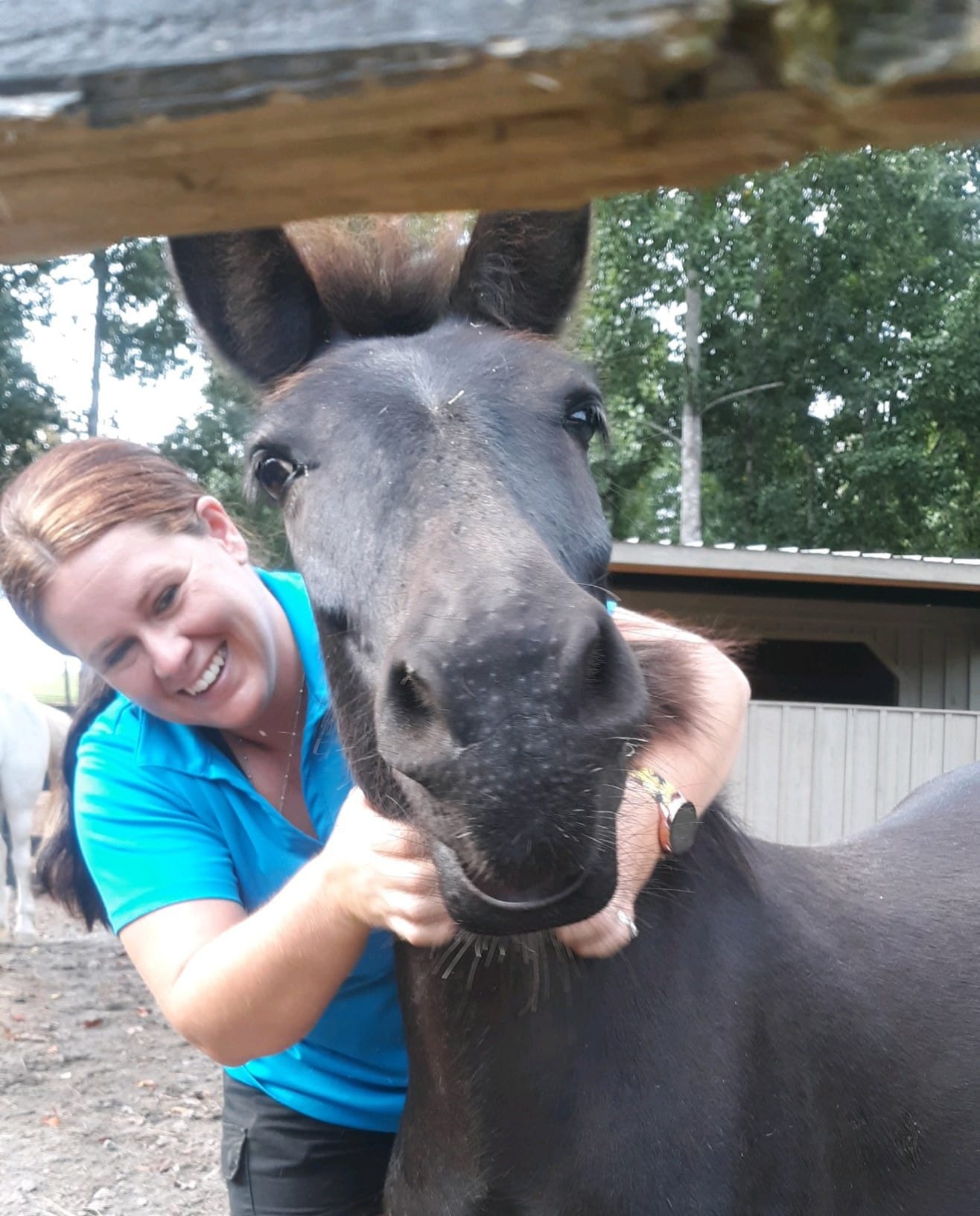 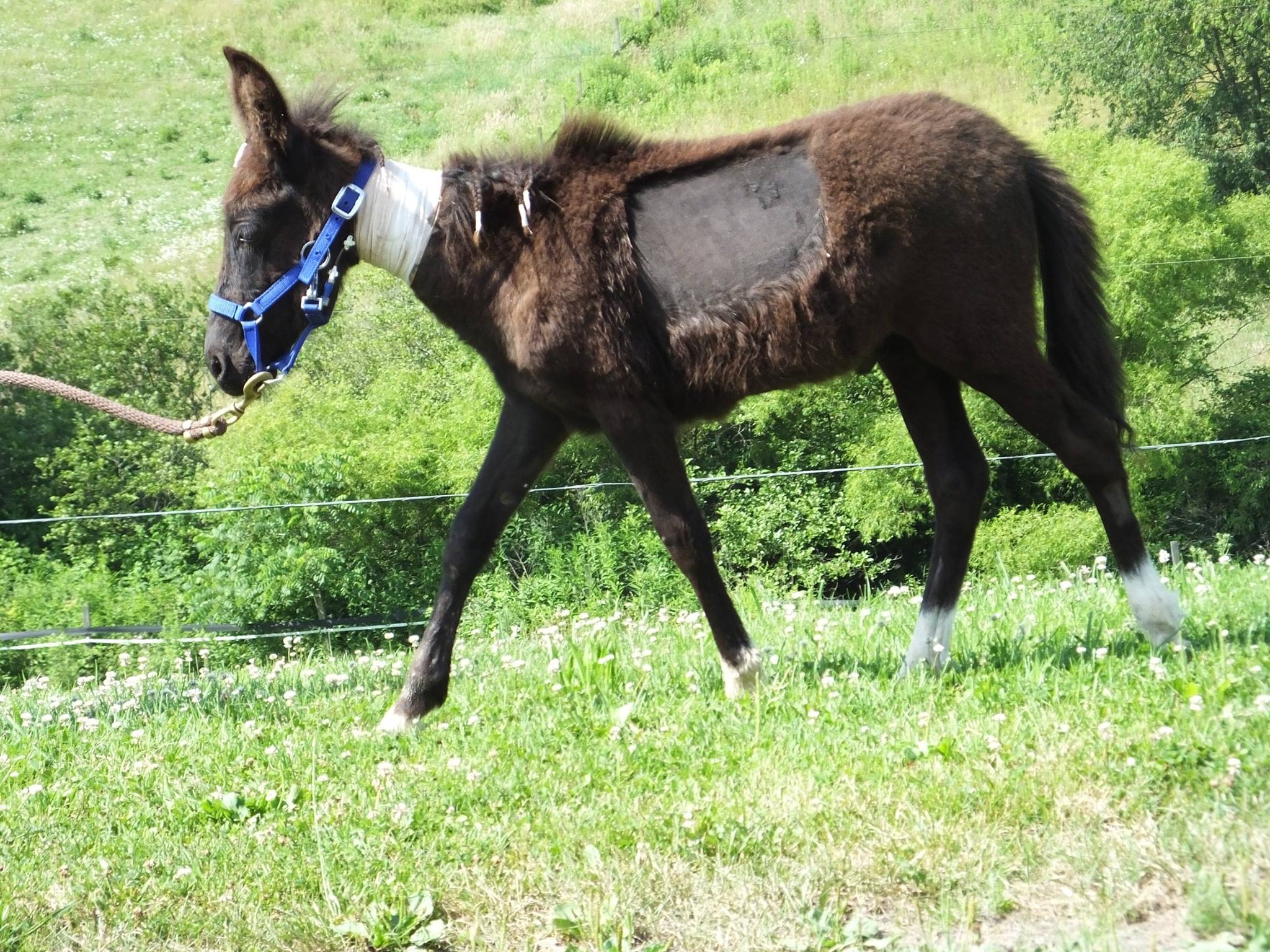 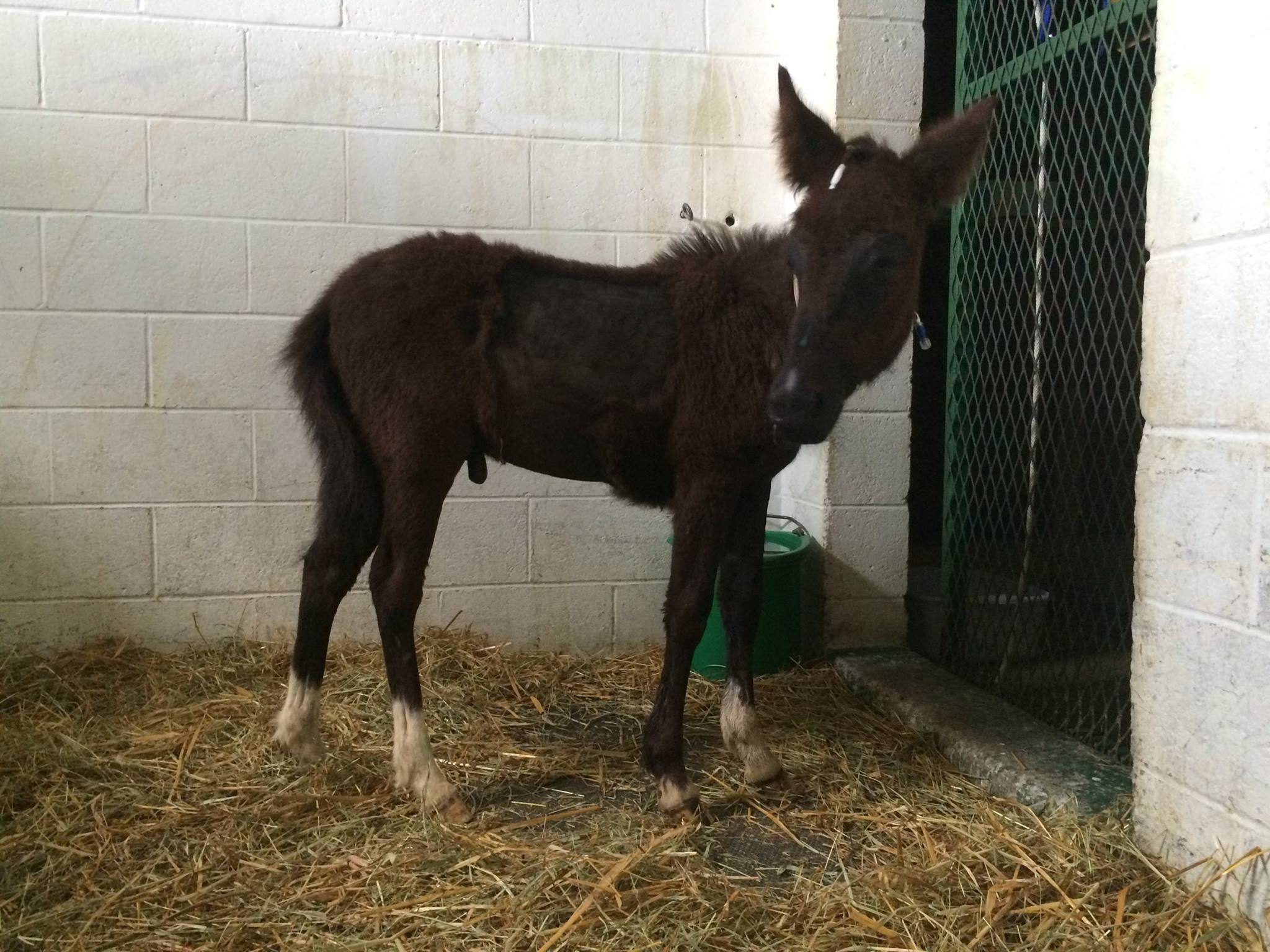 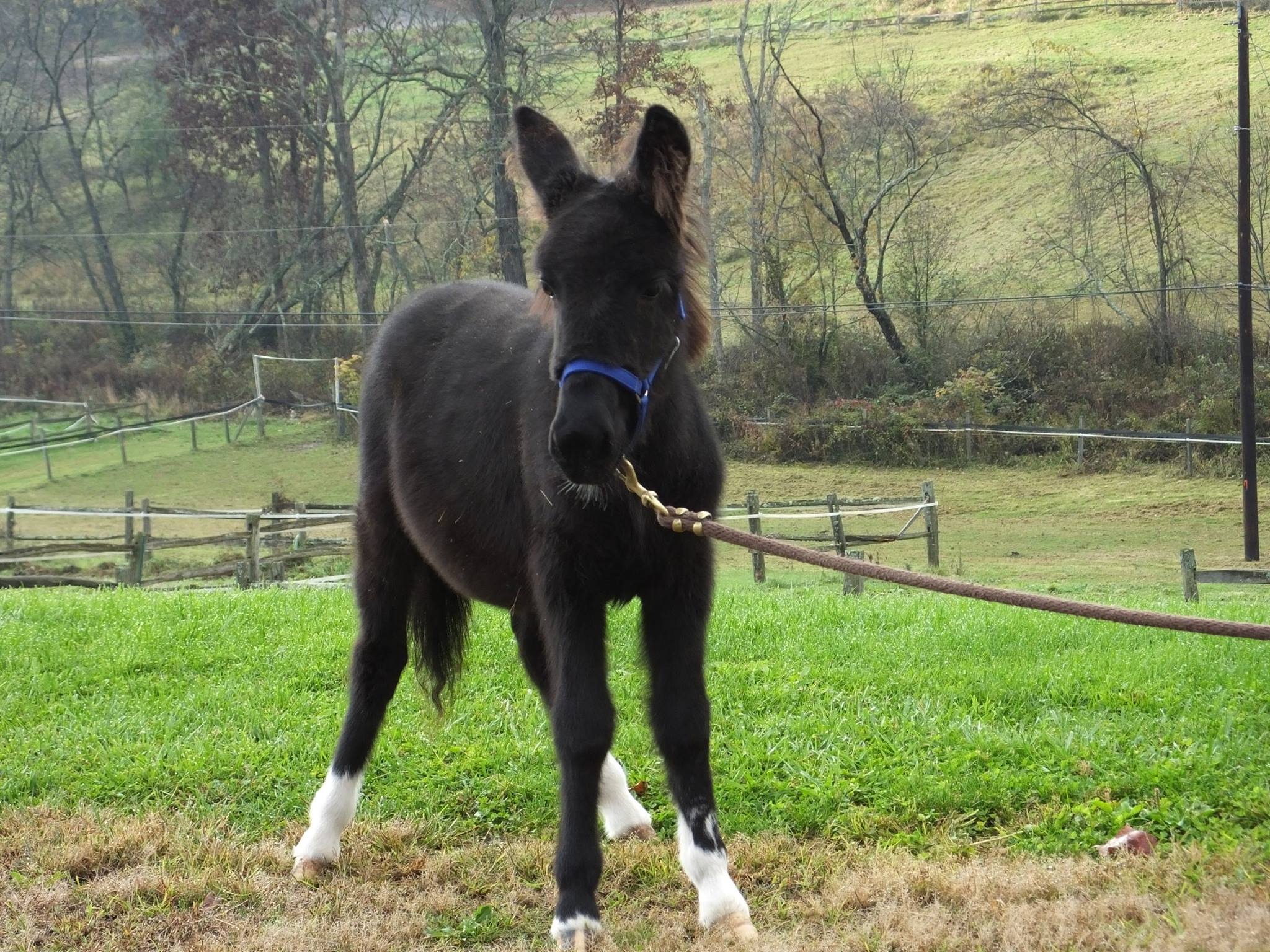